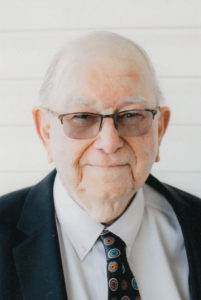 Joyce A. Sanders, 89 of Wahoo, NE passed away Wednesday, January 20, 2021 at his home surrounded by his family.  He was born on April 10, 1931 in Oakland, NE to Charles and Violet (Larsen) Sanders, Sr.  He graduated from Oakland High School in 1948 and was united in marriage to Bonnie Phillips on November 8, 1950.  They had three children, Kurt, Jacki and Joni.

Joyce farmed for 50 years on their farm northwest of Oakland before retiring and moving to Wahoo in 2002.

He was baptized and confirmed at West Side Methodist Church near Oakland where he received his 50-year membership pin.  He served several years on the United Methodist Church board in Lyons.  After moving to Wahoo, he became a member of the First Presbyterian Church of Wahoo.

He was preceded in death by his parents; daughter, Jacki; brother, and sister-in-law, Charles (Jean) Sanders; sister and brother-in-law, Verna (Ervin) Smith.

Condolences for Joyce A. Sanders