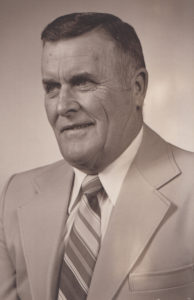 Kenneth D. Wallin, 90 of Wahoo, NE passed away February 2, 2017 at South Haven Living Center in Wahoo, NE. He was born August 23, 1926 in Colon, NE to Harvey and Florence (Nelson) Wallin. He attended District #88 grade school and graduated from Wahoo High School in 1944. He enjoyed playing sports in high school. During his senior year playing football his team struggled to win only one game but only after his coach bet the team a steak dinner for a victory. After high school the University of Lincoln wanted to recruit him but Kenneth decided to become a farmer. He was united in marriage on November 18, 1961 in Wahoo, NE to Olga Holub.

Kenneth was a lifelong farmer in the Wahoo area and served on the Wahoo Police Force from 1970 to 1988. He was a member of the Fraternal Order of the Eagles in Wahoo and enjoyed playing cards and drinking coffee with friends.

He was preceded in death by his brother, Donald Wallin and parents.