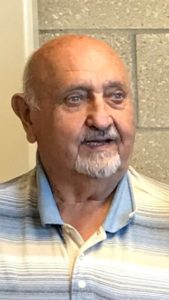 Marlin M. Keller, 85, of Ithaca, NE, entered into rest on Saturday, December 26, 2020 at Bryan East Medical Center in Lincoln, NE.  He was born October 10, 1935 in rural Hooper, NE to Marvin and Margaret (Jordan) Keller.  Marlin graduated from Hooper High School in 1953.  On June 16, 1957, he was united in marriage to Judy Voskamp at the Congregational Church in Uehling, NE.  Marlin farmed for most of his life and he worked for Frontier CO-OP in Mead delivering fuel.

Marlin was a member of the Ithaca United Methodist Church and the Saunders County Livestock Association.  He worked the chains at Mead football games for many years.  He was an avid Mead sports fan and a Nebraska volleyball fan.  Marlin enjoyed tractor pulls and he was a big supporter of 4-H when his kids were in school.

He was preceded in death by his wife, Judy Keller; daughter, Teresa Hoback and brother, Lloyd Keller.