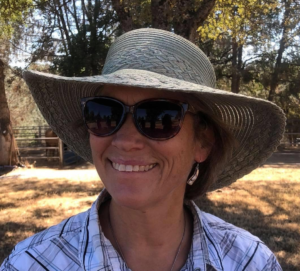 At a later date in the Spring or Summer.

Mary Hanson, born in Omaha, Nebraska to Joseph and Gladys Sokolik on August 18, 1955.  She is a graduate of Ralston High School in Nebraska and attended the University of Nebraska where she earned a Bachelor’s degree in Animal Science and a Masters in Regional Planning.

After college, she worked at Waldo Farms at Dewitt, Nebraska.  She became a mail carrier and worked in Beatrice, Crete, and Lincoln.   She was appointed Postmaster at Ithaca, where she met her husband, Dwight Hanson.  They were married on May 12, 1990 in Ithaca, NE.  She finished her post office career as the postmaster of Ceresco NE.   She went back to school and got a Masters in Regional Planning.  This helped her get her dream job as a trails planner for the National Park Service in the Rivers and Trails Department of the Midwest Region.  Several of her projects were in Saunders County and throughout the Midwest Region.  She became the first “horse trail” expert in the Park Service and worked on many projects outside of region including a 1000 acre preserve of equestrian land near Lexington, Kentucky.

As an avid animal lover (especially horses) she always had cats, dogs and other pets throughout her life.  She competed, driving horses in Combined Driving Events in the United States and Canada and many Competitive Trail Rides throughout the United States.  She was the past president of the Eastern Nebraska Driving Society and was a regional representative for NATRC competitive trail riding.  She also volunteered at the Worlds Pairs Championship, the Worlds Equestrian Games, Saunders County Lost Pets, the Nebraska Horse Trails Committee, and many other organizations.

There will be a Celebration of Life this coming Spring or Summer.

Memorials will be used to help build a new building for the St. Lillian’s Children’s Home in Gayaza Uganda.   The family wishes to extend our sincere thanks to the doctors, nurses, therapy specialists, and friends who supported Mary during her illness.

Condolences for Mary A. Hanson