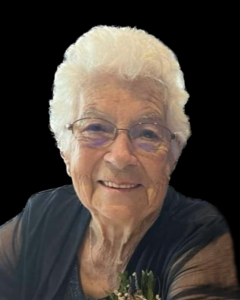 *The Funeral Mass will be live streamed on Svoboda Funeral Home Facebook page.

Copy and paste the link below to donate to St. John School:
https://secure.lglforms.com/form_engine/s/MFr_ZE1SyhZvB5GxayWmbg

Mildred Helen Adams Vasa was born February 21, 1935, in Winthrop, Massachusetts to Mildred (Sweeney) and Charles Adams.  She went to Heaven on January 13, 2023, in Lincoln, Nebraska following a brief illness.

Mildred was known as Nancy from a very young age.  The youngest of four children, she grew up on Walden Street and graduated from Winthrop High School in 1952.  Nancy was a host for the Seaman’s Club in the area when she met Naval Reservist and Nebraskan, Frank Vasa.  They married on November 6, 1954 at the St. John’s Catholic Church in Winthrop.  Nancy moved with her husband from the city to a farm in Nebraska.

Nancy admitted those early years in Nebraska were tough on a city girl.  From learning to cook the Czech dinners to driving a grain truck to the elevator with their first 3 children in the hot cab. She relied on her new friends Marcene Havelka and Lucille Pleskac for everything from childcare to learning to bake kolache.  They had no running water or indoor plumbing when caring for her first 4 babies.  In 1960, when she was in the hospital with her 5th child, Frank moved the family to the farm where they raised their 10 children.  Nancy stayed on the farm for the rest of her life.

When time and money permitted, she would load up the kids in a car, station wagon and later a bread truck and drive across the country to Winthrop to see her family.  Nancy continued the tradition of going to Winthrop with her older grandchildren, always driving them past the house on Walden Street.

It was important to Nancy that her children receive a Catholic education; all 10 attended St. John’s Elementary School in Weston and graduated from Bishop Neumann High School in Wahoo.  Her devotion to the schools continued the rest of her life.  Long after her last grandchild graduated from Bishop Neumann, you would still find Nancy in the stands cheering on the softball, football, and basketball teams.  She even mentioned to the doctors last week that she needed this heart thing fixed quickly because she had basketball games to go to next week.

Nancy (or Nana as she was known to all) was most happy being a Mom and a Nana.  Her prized possessions were her children and grandchildren.  She would have been what used to be described as a homemaker for the first 25 years of marriage.  She then went to work at Hakel’s Café in Weston where she made lifelong friendships with co-workers Rose Furasek and Lorraine Sabatka.  She later was a CNA with Tabitha, Madonna and other home health care companies in Lincoln.

After her retirement, she would volunteer her time with hospice patients in Saunders County.  She traveled to see her out of state children, enjoyed playing Scrabble with whomever would challenge her and she would most always win.   Besides the Cavaliers, she loved her dog, Sandy, the Nebraska Cornhuskers, The Boston Red Sox, The New England Patriots and still loved Tom Brady!  She could be found at Mass most mornings or with it streaming on TV.  She was happy on any sports bleacher in the evenings and weekends.

Nancy is survived by her children Jeanne (Richard) Donia, Frank (Nancy) Vasa, and Nancy Elbracht of Weston, Charles (Tina) Vasa of Gulf Port, FL, John (Tammy) Vasa of Weston, Dan (Tammy) Vasa of Valparaiso, Betty Cloyed (Brian Evert) of Omaha, Anne (Terry) Langley of Bakersfield, CA, Ron Vasa of Malmo and Julie (Chris) Andy of Peabody, MA.   Thirty-five grandchildren, 42 great-grandchildren and 21 special family members that she loved as her own.  She is also survived by her sister, Rena Tavani of Philadelphia, PA and many nieces, nephews and friends.

Nancy is preceded in death by her parents, husband Frank in 2004, grandson Zachary, great granddaughter, Olivia, her brother Charles, and her sister, Barbara.