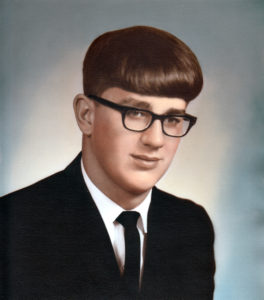 Roger Lee Dinges, 73 of Wahoo, NE died Wednesday, January 12, 2022 at his residence in Wahoo.  He was born October 15, 1948 in Osceola, NE to Leo and Rose (Bengford) Dinges.  He lived and attended school in Osceola, NE through his sophomore year in high school, at which time his family moved to Lincoln, NE.  He attended and graduated from St. Pius X High School in 1966.   Soon after graduation he joined the U.S. Army during the Vietnam War.  In 1968 he flew to Vietnam in the heat of fighting with mortar and rocket attacks.  He was Officer in Chief of the 116th Helicopter Assault Company.  He was honorably discharged from his duties on Oct. 26, 1969.

He spent time in Detroit, MI and back to Lincoln.  He was employed with the City of Lincoln until he retired due to health conditions.  He moved from Lincoln to Wahoo in 2010.

Roger was an avid Nebraska football fan who never missed a game on TV and was an avid reader who had a large library of books.  He was a kind friend to everyone he met.  He knew and called all his acquaintances by their first name.  He loved his siblings and called each one every week.  To know Roger was to love him.

Roger is survived by his sisters, Lois Schofield of CA, LaVonne Mancini of MA, Carlene Reeves of Wahoo, Mary Kuhn of MA; sister-in-law, Marilyn Dinges of CA; many nieces and nephews.

He was preceded in death by his parents; infant brother, Joseph, sister, Charlotte Myers; brothers, LeRoy, Robert Dinges; 5 brothers-in-law and one sister-in-law.